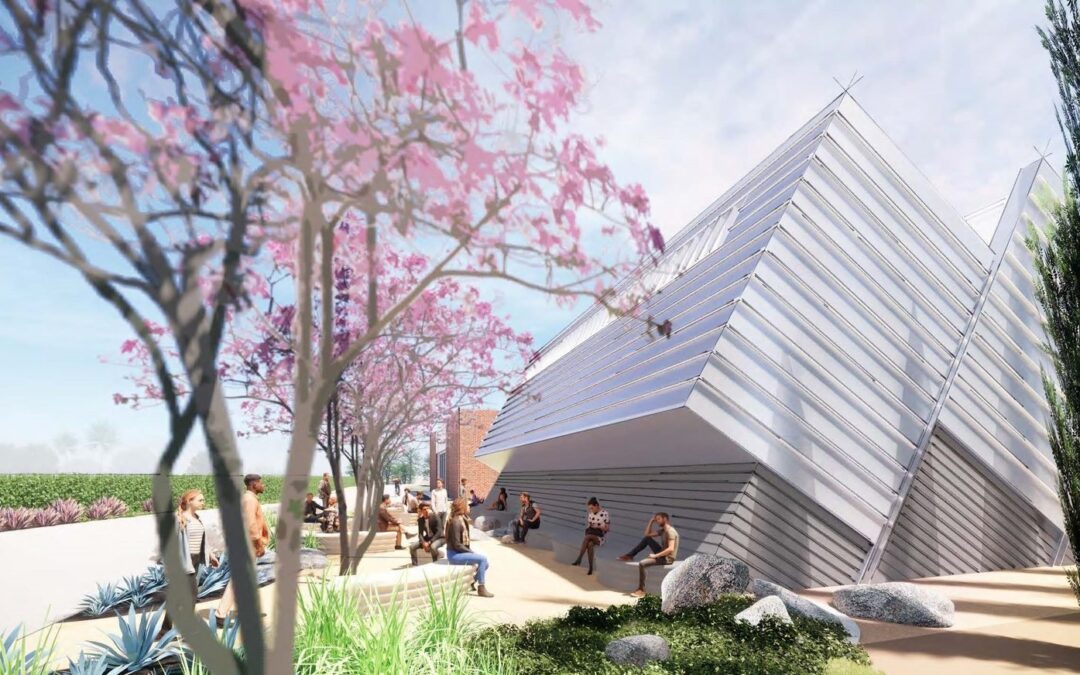 A longtime goal of the Cal State University, Long Beach campus is well on its way to being realized with the renovation and expansion of the Carolyn Campagna Kleefeld Contemporary Art Museum, formerly known as the University Art Museum.

Though still in the trenches of construction, the new exterior walls of the museum are up which now encompass an additional 4,000 square feet of land—most of which is dedicated to the Main Gallery, an impressive near-3,000 square foot windowless expanse that will be built with moveable walls, allowing for multiple exhibitions at a time.

Two galleries were typically the most the museum could host before. The remaining square footage—11,000 in total including new outdoor gardens and seating areas—will feature a state-of-the-art education laboratory, a reading and archives room, an office space, a visitor’s lobby and reception area, a retail shop, a temperature-controlled storage room and three permanent gallery spaces, some of which will have multipurpose uses.

“Expanded, professional-grade galleries will host several different exhibitions at a time and allow the museum to deepen its leadership in the exploration of abstraction,” said newly appointed museum director Paul Baker Prindle in a statement.

Clark Construction Group began working on the museum in June 2020, alongside renovations to the museum’s neighboring Horn Center which is in the process of retrofitting and converting its computer lab and undergraduate advising center into 10 classrooms, two lecture halls, and additional all-gender restrooms.

The total cost for both projects is $24 million, according to CSULB. While state funding is paying for the Horn Center, private donations are footing the bill for the new museum. Its greatest benefactor is the museum’s new namesake, artist Carolyn Campagna Kleefeld, who donated $10 million, as reported by the Daily 49er.

The museum also includes a 521-square-foot gallery built in her honor that will be outfitted with barrel ceilings and hardwood floors. The Kleefeld Gallery room will house a permanent collection of some of her works in addition to a rotating selection by other artists.

The Kleefeld Gallery room will be the only space with hardwood flooring—the rest of the museum, save for the carpeted offices, will be laid with concrete. With this cozy feature, the gallery room will also be used as a community hall where visitors can reserve quiet, loud, evening or weekend hours for use.

“We definitely don’t want to be another ivory tower in the museum space, that’s really the antithesis of what we’re working towards,” Amanda Fruta, public affairs and communication specialist for Kleefeld Contemporary explained. “With the quiet hours, loud hours, extended hours, gardens, multi-use spaces, learning spaces and all-gender bathrooms, we want really want everyone to feel welcome here.”

Pfeiffer Partners Architects will be adding a new, glass vestibule to the original mid-century façade designed by famous architect Ed Killingsworth. The near 15-foot-tall diamond offset structure will act as an eye-catching attraction, hopefully encouraging passersby to stroll through the museum, something the space had previously struggled to do, Fruta said.

Please fill out form as completely as possible so we can contact you regarding your purchase request.